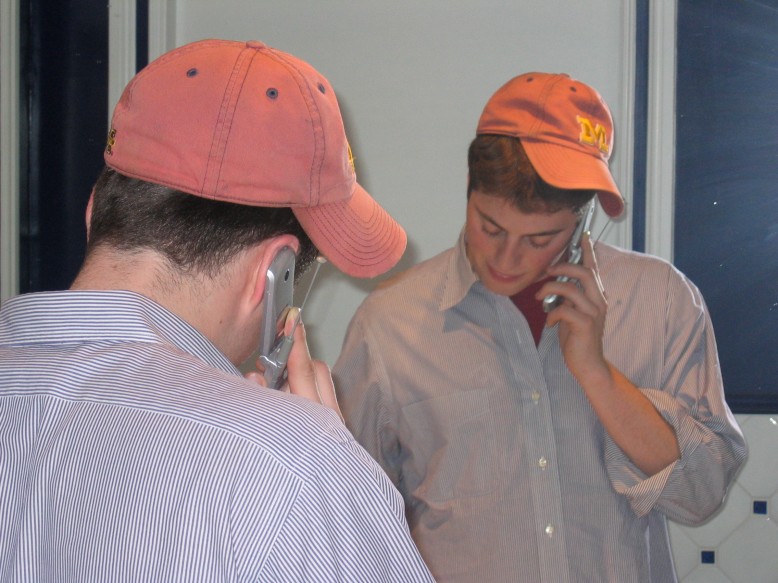 …who looked like this when we first started dating TEN years ago. (that bleached Michigan hat was all but his trademark back then.) can you blame me for finding a way to make sure he noticed me amongst the throngs of girls at BU?

(ten years ago: he and i had a whirlwind romance [ahem] during the last two summer-y weeks of freshman year. he was set to move back home for the summer a day or two before i was, so he drove home, from Boston to NJ, and then back in the same day… for me. [didn’t find this out until much later in life.] the summer that followed was one filled with the sort of terribly awkward moments that come with trying to keep a new flame going between two 19-year-olds living wild lives 300 miles apart. case in point? me, bone-shakingly nervous, calling him on his birthday, someone else answering his phone, the background clearly indicating a keg party of some sort, and the guy who answered the phone asking ‘WHO is this?’ before quietly and wordlessly just hanging up on me. right. also, i sent him a birthday card, one that he didn’t get until like three weeks later, all torn and beaten up, because i unknowingly sent it to his old address, which at the time was the most mortifiying thing i could ever imagine. two months later, however, when i in turn got the most ridiculously awkward and sweet birthday card from him, i remember thinking, “oh. welp. here we go.” and how right i was.)